Have you ever had your shoulder or knee start to hurt in the middle of a workout?  The first set or two is fine and then something just feels off: a click starts or pain sets in.

You might think you sustained an injury.  But maybe it’s just your body’s way of letting you know you’ve reached your neurological threshold.

The WHAT?  Uncool Trainer coming atcha with some science! 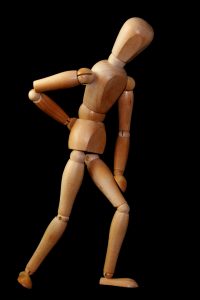 When my clients come in with aches and pains, I often tell them that we must keep the intensity of the exercise within the neurological threshold.

I say, the resistance or reps have to be at the right intensity to get the brain to understand what you’re asking of it.

You see, if your shoulder is hurting, your muscles can only give so much before the brain kicks in with compensation mechanisms. Your brain is always trying to protect you.  Even that means compensating.

So the trick is to exercise at a threshold the brain understands without creating compensation or sending pain signals.  This may mean doing 1 set of 8 reps of a bodyweight exercise.  Further, only on one side of the body.  Not both to “balance it out.”

What your muscles can give is determined by your brain. So even though you may feel ok initially during exercise, if the intensity surpasses the neurological threshold, you’ll likely aggravate a muscle imbalance.

So how do you know when you’ve reached that threshold?  Or in other words — when to stop?  You gotta test it.  Good ‘ole trial and error.  But start with way less than what you are capable of.

Case in point: I’ve been helping a runner with hip pain. She’s progressed from pain on a daily basis, to pain only after she runs too far.

She’s capable of running 3+ miles.  But running that distance makes her hip hurt a few hours after.

So I had her do a test run of 1 mile. Her hip felt fine after that. Granted – she had been good about doing her corrective exercises homework. So then I had her test 2 miles. After that, she had a little bit of hip pain. So we know that her current neurological threshold is 2 miles.

I’ve tested her hip muscles and know that her pain is due to muscle weakness.  Her hip is letting her know that it can’t keep up with the demands that are being asked of it, aka running more than a couple miles.

So we’ll keep working on strengthening, not stretching, her hip muscles and slowly build her back to the 3+ miles she usually likes to run.

It’s so hard to do less when you know you’re capable of doing more.  But, it pays off in the long run to work with your body’s neurological limits.

This strategy works well to keep you exercising even with some pain.  Nothing is worse than being sidelined from activity you enjoy!  My client doesn’t have to avoid running all together.  She just must respect her current neurological threshold.  As she continues to strengthen her muscles, her neurological threshold will increase.

Want to train with me? Check out my virtual training options.

You have Successfully Subscribed!

No images found!
Try some other hashtag or username